He was Generation X's Elvis, and so much more. Flaunting a new look, a new sound, and a lifestyle that was too sexy and edgy for the mainstream masses. Which is exactly how legends are made – by bursting through safety barriers to open minds and hearts to something new, and in the process, creating a deeper creative-awareness in the world than was there before.

At age 14, I screamed and cried for him at the Purple Rain concert, just like an Elvis fangirl would have done back in her day. Larger than life, Prince epitomized love, sex, romance, racial harmony, philosophy, musical genius, fashion forwardness and free-thinking. He had psychedelic ideas and he conveyed them in beautifully honest ways. I imagine that he created many of his dream worlds to escape his harsh and boring reality. There was no one and nothing like him in the world, and there never will be.

I don't even know how to process Prince's unexpected death, right after losing David Bowie — I feel like part of me, part of my generation is crumbling back into the earth. It's time to let go and make way for new legends, and to understand that they all get their own time.

Goodbye from this generation, from this time, Prince. Thank you for everything you gave us, which was nothing less than your entire self. 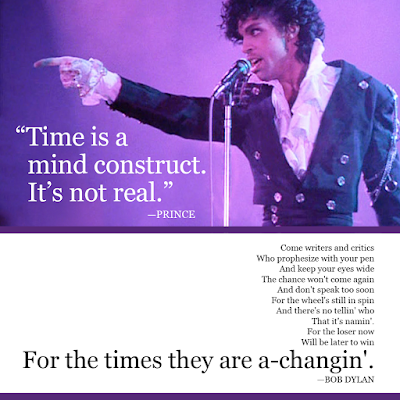 Politics. Religion. Science. Fashion. Art. Entertainment. Food. Is there really any facet of our lives that doesn’t spark controversial conversation sometimes? Even angry conversation that leads to arguments and worse, wars? I’ve seen some pretty harsh stuff on social media lately (primary colors oh, my!) and my first instinct is to ignore it or hide it so that I don’t have to give energy to the negativity. My second instinct is to comment and get involved, though it’s a rarity if I do because social media is not just social, it’s also professional.

I’ve got my reputation to keep palatable. It can be dangerous to be open about controversial topics. It can also be frustrating if you, like me, don’t enjoy angry conflict. Seen another way, though, all the "stupid crap" you see out there is a beautiful thing. Debate is integral to the high ideals of democracy. Our right to spew our opinions all over the place is a privilege that too many people have paid for with their lives. We all know this. The beauty I think we tend to miss goes deeper.

Our freedom of speech is representative of our freedom to be what we truly are, and to live peacefully within a mix of different ideologies, philosophies and personal ethics. It is a balance that creates the country we live in and systems we rely on. So the next time you you feel angry towards a politician or person for having a passionate opinion that differs from yours; the next time you shirk away from sound bites and information that makes you want to throw up, instead of recoiling or lashing out, try embracing it. Listen and appreciate it.

I am not suggesting you agree with it. I’m not suggesting you change your mind at all. What I suggest is being open and tolerant with everyone who would run the world differently than you would. Be grateful that we aren’t all the same! If everyone thought and behaved like I do, we’d be in some socialist, anarchist, artsy commune and I’m guessing things would fall apart. If everyone thought and behaved in any ONE particular fashion, I’m guessing things would head straight towards a dictatorship or a corrupt, highly limited society. Instead, embrace the balance that is created by living in a mix. Be vigilant against corruption and lies, yes! But opinions that are different than yours? Debate them healthily, and thank your God that someone is out there to do the jobs you can’t do, that someone is looking out for people who you don’t even think about, that someone is watching out for our safety from dangers we don’t even know exist.

The worst thing we could do is have one party win out in politics, or shut out people who we think are “different” than us. One of my favorite people lives right here in Ocala — I haven’t met him, and I often disagree with his politics, but he’s awesome! This guy hand-paints signs that he posts on his property and carries around town. He’s a shining example of democracy, it’s absolutely a beauty to behold his signs, my agreement doesn’t matter at all. I respect the way he engages in the system and gets his points across peacefully. 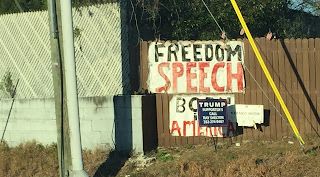 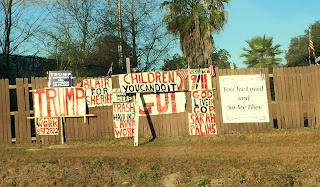 Listen, learn, and above all, protect the freedom of speech that allows people to say things you despise.  We have such an amazing system when it’s used properly. We must shed light on corruption, abuse of power and crime… and we must encourage everyone to engage in debate and in the systems we have in place, ESPECIALLY if they don’t agree with us!
1 comments