Last week, I won seven ADDY® Awards, Best of Show and the AAF Silver Medal Award. In the wake of these wins, all of the ADDY Galas happening around the country and the Oscars, I explore: what do awards really mean, anyway? To hear many say, they don't mean a thing.

Awards are meaningless to me, and I have nothing but disdain for anyone who actively campaigns to get one.
~Bill Murray

Awards are only a publicity gimmick.
Tony Randall

Awards are so unnecessary, because I think we get so much out of our work just by doing it. The work is a reward in itself.
~Natalie Portman

On one hand, they are totally right. After all, the work itself is satisfying. Hopefully we all have a better motive to do good work than awards. Hopefully we're saving the world one project at a time and loving the process.

On the other seventeen hands, however, they are wrong. For entertainers, artists and designers, what we do has to be well-received or it doesn't work. Awards highlight work that works. I don't mean people's choice awards, like American Idol, I mean awards that are judged by experts. These judges have the privilege of honoring and celebrating great work. In doing this, it encourages more great work to be produced year after year. They give deserved recognition to many who are often underpaid and unsung.

“This award is meaningful because it comes from my fellow dealers in celluloid.”
~Alfred Hitchcock

There's more. Awards help validate a smart and talented artist's position, thereby educating clients. All too often, businesses hire creatives to do their design work but don't trust them enough to let go of the reigns. They often dictate unreasonable parameters, then make choices based on their personal taste or untrained opinion. One of the biggest challenges to creating solid, effective work can be the clients themselves. Awards can also help to get more clients, too, by increasing the credibility and visibility of the recipient.

It's easy to say that awards don't mean anything, but if you work your ass off and are rewarded with an award, you can't honestly tell me you aren't thrilled to get it. Natalie Portman's quote above doesn't foreshadow her tearful and joyous reaction to winning the Best Actress Oscar this year.

"This is insane. I truly, sincerely wish the prize tonight was to work with my fellow nominees. I am in such awe of you."
~Natalie Portman

What I feel most for my wins this year is validated. I am especially proud that the Best of Show award was for an inexpensive yet highly conceptual, one-color piece. It demonstrates that a great concept doesn't need a giant production budget to succeed. In a town like Ocala, that's valuable because it means small businesses can have stellar creative, too.

“To those of you who received honours, awards and distinctions, I say well done. And to the C students, I say you, too, can be president of the United States.”
~George W. Bush 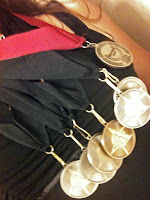