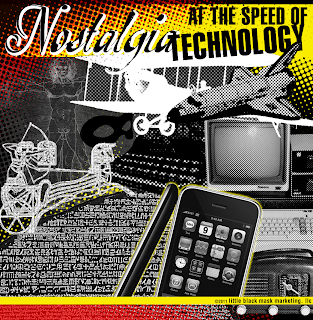 Star date: January first, two thousand and eleven. I begin my 365 days of blogging today. New Year's Day is a good day to gain perspective through reflective and resolute vision, to re-evaluate and adjust course towards goals and dreams. I have a process for this that I try to do every January. Today, though, it seems glaringly obvious to me that it needs to happen more often than yearly. As Bob Dylan says:

"If your time to you is worth savin'
Then you better start swimmin'
Or you'll sink like a stone
For the times they are a-changin'."

In 1982 "Tron" broke special-effects and conceptual ground. Twenty-eight years later in the sequel, "Tron: Legacy," an aged Alan tells Flynn's son Sam that he has received a page from a number at Flynn's old arcade. Sam's response is, "You still carry a pager?"

"It's this thing we had back in the 80's - like a phone that you couldn't call from. You would call it and put a number in. Then the person who gets it finds a pay phone, puts a quarter in and calls you back. It's like one-way texting without the text. Just numbers. It was really handy!"

Looking back, my technological and cultural renaissance started with MTV. I can't imagine what I would have thought back then if someone would have told me about today's smartphones. I could only relate it to something on Star Trek. We didn't have the internet yet, and mobile phones were only in wealthy people's cars. Videos were on tape, photos were on film, music was in the store, research was done in the library and I used to call a radio station when I couldn't think of who sang a song.

Back then, the year 2000 sounded futuristic, as if we would all be 100 years old, wearing enormous shoulder pads and piloting our cars through space. I thought it would never arrive. Conversely, I knew things like virtual reality holographic video were coming, but I never dreamed it would be so fast!

My MTV was followed by an Atari home video game system in 1982, a Tandy keyboard that used BASIC language in 1984, a pager in the early 1990's, the internet, a cell phone, a laptop, then a short lull before the social media flurry hit civilization as we knew it.

There was a period of time after the social media flurry hit and before Facebook at MySpace for dinner, which was kind of a golden age. Maybe it was the eye of the storm as it passed over us. I look back on that time like "the good old days" of social media expressionism. Blogs were fresh and most anyone who had one was actually a thinker, an artist, a journalist, had something to say. MySpace was cool and expressive, people were uploading art, music, poetry, writing and deep thoughts. It was a supportive community of like-minded strangers and friends. If you blogged on MySpace during its golden age, people not only read it, they commented. Thoughtfully. Sometimes the string of comments was more interesting than the blog itself. You were only allowed 12 photographs, but It was a philosopher's paradise.

The internet was relatively uncluttered. Your creative, charitable or political message stood some chance of being seen at random. Twitter started up and had few enough members that it showed you a visual of your connections in a giant, interactive grid-like map. Your tweets were not lost in a stream of voices.

It's all a blur now. How long ago was it? It was something like 2004 - 2007, give or take a year. I look back on it with nostalgia, knowing we will never get it back. I love Facebook and the fact that I can find just about anyone on it, but along with everyone's old friends from high school there are parents, bosses, clients, exes and children. Facebook hasn't just broken down the walls between us by linking us together, it has also built walls up around creative, free-spirited expression. I love having my wall written on, though, so please do so!

We might never have that golden age back, but my bet is that there will be other ages with even greater potential for creative expression and change. I'm always looking for the next wave because I don't like something as much once everyone likes it. It ruins the spirit of that thing somehow. I look around every corner for new technology and trends that give that feeling of having climbed to another level and arriving at the edge of a cliff. A cliff where paradoxically, if you step off you don't fall down, rather you find yourself on another higher level where the world is just a little bit different and new things are possible. Magic. Like a video game. It's an addiction.