If you had a cruise ship with no passengers, it wouldn't matter how decked out with luxurious and useful amenities, fantastic movies, art and music it was, or if it had a great cruise director to organize the guests and activities. With social media, just like with like parties, having the ship all to yourself is not a good thing.

For two days now the buzzers have been buzzing about Google Buzz. The Google gaggle clammered, "Google's got a Facebook. It's Google's new Twitter. It's got update streams, comments and media sharing, right in your email!" My first reaction was, "Oh, like Yahoo?"

Note the "buzz up" button at the bottom of this blog. It's not for Google Buzz, it's for Y! buzz. That's Yahoo. Yahoo has had it's own social network for years now, since Facebook was an infant. The Yahoo 360 Beta, which was great like MySpace in the beginning, finally closed in 2009 because not enough people were on it. Yahoo integrated much of the 360 info right into their regular profiles. I can blog, update, comment, connect to other people, media sites, apps, get feeds and news, and so on right from my Yahoo email or home page.

Here's a look at my barely populated Yahoo stuff... 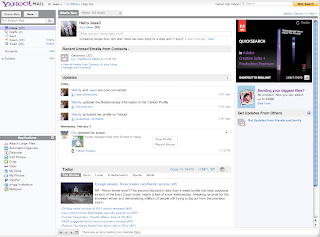 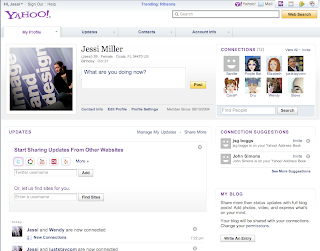 ... and here's a look at my barely populated Google Buzz stuff: 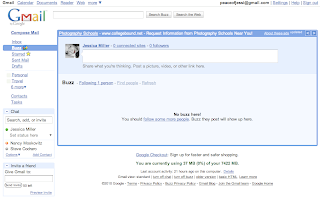 I know Google is big, I know they're everywhere, they even ran my favorite Super Bowl commercial. But sober up techies, another social network is just another social network, no matter who owns it and this is sort of a knock off of Yahoo anyway. So it's not benefits we're comparing, it's location. Where do you spend your time? Do you feel like relocating everyone you know and all of your information? If you already use gmail as your hub, it will be great for you. If not, it's just another added feature that lives there. I don't see all the bees buzzing away from Facebook, Yahoo, Twitter or whatever hive they've already built, I see it as simply a benefit to gmail users.

PS: click the "buzz up" & Digg buttons, please and thank you!