There's something haunting the holidays this year – reaching its slimy, oozy, steaming tendrils around everything in search of fresh fodder. It's not the Ghost of Christmas Past Recessions, it's a new breed of haunt for the new millennium. It's not going anywhere for a while, so we've all got to stand strong through this holiday season in anticipation of a dawning relief that is coming ... sometime soon.

What can we do about this insidious ghoul that takes on different faces – such as fear, oppression and depression? Look it in the eyes, realize it's there, and dance with it! Make the best of it because it's not leaving until... sometime soon.

This Halloween, instead of the usual horror-house with ragged mummies, vampires and spider webs, put something really scary lurking behind every turn. Life savings that disappear in a cloud of smoke. Unemployment jumping out unexpectedly. Bankruptcy. Foreclosure. Repossession. Swine Flu. Hunger. Homelessness. These things will scare your visitors down to their very soul so much that they'll come out on the other end thrilled just to be alive and well! 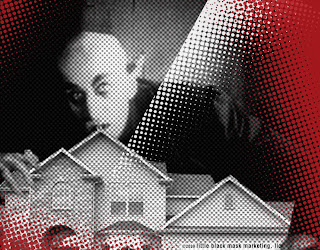 Thanksgiving is my favorite holiday in concept because it's about gratitude for what we have already as opposed to what we want. This Thanksgiving, reach out to others, don't limit it to your closest friends and family. Have big "group dinners," maybe even "block dinners!" People are struggling more behind their brave faces than we know. Holiday times carry enough stress when the money is rolling in, so help make it easy on everyone and just celebrate being alive.

For Christmas/Hanukkah/Kwanzaa/Winter Solstice/Whatever holiday you hang your hat on in December that motivates you to start spending amounts of money that are completely disproportionate with the rest of your year, I suggest a word that isn't normally exciting: practical. Here's an innovative marketing opportunity that would help circulate more dinero without wasting it: discounted gift cards at utility companies, banks, mortgage holders, gas stations, drug stores, grocers, family marts... everywhere. If companies would take 10 or 15% off the top they would sell a helluva lot of cards! I'm all about buying the $50 gift card for $35! Everyone gives and everyone gets. More bills get paid, more shopping is done because more bills are getting paid, and so on.

We will all make it through the scary holiday season together if we maintain our sense of humor, stay grateful, be practical, generous, and creative with marketing and buying opportunities. What are your innovative ideas for the holidays?

If we're lucky, the creepy, haunting ghoul will start to lighten up with the coming of the new year... or sometime soon.

Trust me, I'm in advertising

I'm in advertising. I'm a Photoshop whiz. I'm a blogger. I email and I share information. I'm good at social networking. How much do you trust me?

Since consumers have a general malaise (if not downright anger) for big corporations and big government lately - and they are fed up with being fed dodgy-at-best information in ads for years, they no longer take traditional advertisements at face value. We are in the midst of a social and technological renaissance which has shifted the balance of power squarely into your hands. Yes yours. You.

There is no one group of people called "consumers" that the rest of the people are trying to market to or get a vote out of. Everyone is a consumer, everyone is a voter and everyone has the power. Everyone is an individual, it's a market of one. There is no other cell phone exactly like yours - the model, the color, the screen, the ringtones, the apps, the music - it's all your own unique recipe for what you think a phone should be. You can't be classified into some group called "consumers," you are a person and people listen to you. So am I (you're reading my blog right now). So are they. Who are they though? 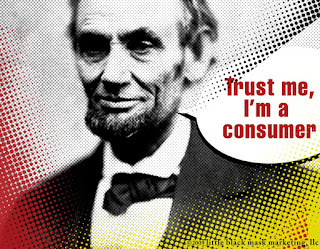 Who are these people that are blogging and tweeting and talking everywhere, and how much can you trust them? The answer is as simple as walking down the street, going into a grocery or a restaurant or any other public place in your town. You know some people, but you don't know the rest so you make judgments based on what they do, what they wear, their smile, what they are buying, what they are driving and so on. You make judgments based on your experience in life. Your own common-sense. All of this word-of-mouth, viral, conversational, social marketing is no different. It's being put out there by the same people, the same communities, it's a mirror, a window to society.

So how do you know what you can trust? We got a little help this month from the Federal Trade Commission, who brought down some new regulations having to do with testimonial ads, blogging and celebrity endorsements. If someone is being paid to blog about something, they've got to disclose that information. Both advertisers and endorsers (celebs, too!) may be liable for false or unsubstantiated claims. This should help give you, me and everyone else a little more clarity to help make decisions.

Watch out though, you may or not still be being brainwashed... "Ladies and gentlemen of the jury, disregard that last thing you just heard, it might not be true." Too late.

Introducing the first annual, freshly-brewed batch of Halloween Portraits from Little Black Mask Marketing. I love Halloween and wanted to sprinkle some of the boo spirit around as well as launch a project in anticipation of the soon-to-be-live Little Black Mask website. If you'd like your Halloween portrait done, pop me a line and a photo (or a link to one on FB or somewhere) and I'll make you batty, too! I'll keep making them through October and it will all come together on Halloween with a poster and website unveiling (not unmasking though!) OOoooOOOoooohhhhh.

Either that or - there were these bats at a party who were taking pics for their social network profiles. 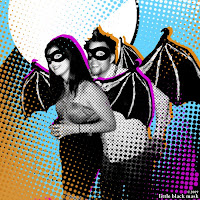 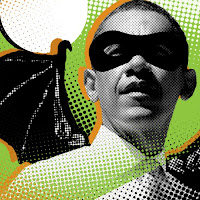 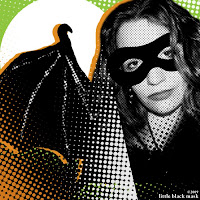 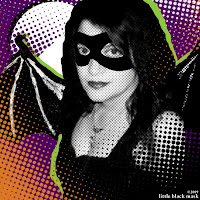 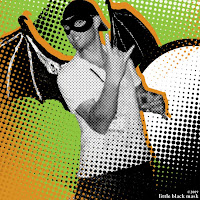 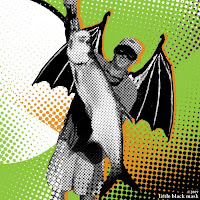 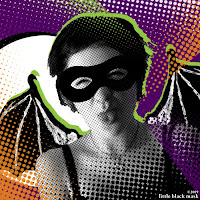 All portraits can be seen on my FB page [click here] and will be uploaded there as they are completed.

Put us on a box, not in one

If you were to go grab a five-foot-high pile of books on management, odds are you wouldn't find much about managing a team of creatives. They're a different breed. They drive a different car, as different as they can find. They don't walk down the same road, they cut new paths. It's not that they're unpredictable, it's just that by the very nature of the word "creative," they don't fit into one standard.


Take job titles and descriptions for example. What is the standard description for Creative Director or Art Director? I have my own idea and I'm sure you have yours, but the truth is it varies based on the company, team, client and project. The way our industry is evolving, the titles themselves are also being re[created].


"What's your title?" a friend asked me last night, telling me how he had waited five days to print his business cards because he kept changing his title. He left it at "designer" - which is more of a statement than it might seem. I laughed because I haven't made my Little Black Mask business cards yet. I can't settle on a title, either! The current one is "Chief Creative," which I opted for over "Chief Creative Crusader." I'm not settled though. I know a "Chief Creative Altruist" and really like that, but won't steal it. Besides, if I did take it (which I jokingly told him I might), I wouldn't feel like it was mine and I would constantly be telling people, "Oh thank you, yeah, I got that from Andrew in Ft. Lauderdale, know him?"


Can you see where this is going? Creatives are individualists. Don't box them in, there is no box. Managing and motivating a team of creatives can be challenging at best. Then creatives often are promoted to management, leading to creatives managing creatives, which can be even worse! It's actually simple, though. To get the most from a creative team, just keep them happy. It's not that hard if you get to what moves them. 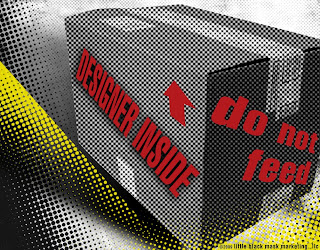 Titles can be important, but instead of a standard new-title promotion without a raise, maybe just let your team make their own titles up.  Money is important, certainly and please, pay people what they're worth – but if money was a creative's chief motivation, they'd be stock brokers or sales people or something that is more directly connected to the almighty dollar. A creative's main motivation is to create. To innovate, to make something new and wonderful, and to be recognized for it.


The best way to motivate your creative team is to facilitate them doing what they do best, and then give the recognition and respect so they want to do more. If you feel a temptation to take all the credit for what your team has done, maybe because you came up with the initial idea or you make more money and need to justify that, resist it! If you don't need the team, if it's all you, then do the work yourself. Play quarterback without your team, go ahead. When you come down off that mountain and realize you do need them, that you chose them for their strengths, take a moment to lift them up and let them shine. Do it every day and do it publicly.


As a leader, take credit in being able to keep everything cohesive and on-brand, take credit for knowing what a great team you've got, be proud of how well you all work together, how everyone's input is important, be the star quarterback and take credit for a lot of things... but give more than you take. It doesn't cost anything, and the value is immense.