Farming is the new black

Farming? Really?
Yes, if you're not already hooked on plowing, you've at least seen a related request (or a hundred) come across your Facebook. As you read this blog, it's already too late to spot this trend at the early-adoption stage. Be it in cyberland or live earth, farming is sprouting up and growing fast.
When it comes to trends, I find that I get tired of themes and buzzwords right about when they become most relevant to the general public. Aesthetic trends, for example – just when something I like becomes readily available, I know it's time to move on. Remember the suns and moons, Raphael's angels, concentric circles and grunge? Alas, I loved them all once. The disappointment that comes when I can easily find what I like gets replaced by a curiosity for what's new and not on every-other teenager's shirt.
To stay ahead and set trends, you have to move fast and be different. You shouldn't be doing what the masses do. However, the largest percentage of consumers happily ride the big waves. They were out there buying suns and moons set in dark blue and gold because it was "in." They are still caught up in a 70's and 80's bag that's mixed up with hip-hop and grunge right now, though thankfully I believe the "swoosh" is no longer the most popular logo element in new designs. If you're selling to this larger percentage of consumers, then it's not always a bad thing to be with the current trend as opposed to ahead of it.
"In this economy...blah blah blah."  Those words are old now if you're a trend-setter but they're not old to the average person feeling these tough times. They're still highly relevant. How are advertisers speaking to consumers right now? With themes of value, of a deeper meaning, back-to-the-basics, of helping out and pitching in. In a time when the government is needed most, it is trusted least. Self-reliance used to be running your own stock portfolio, heavily investing in a 401K and saving for kids' college. Now, self-reliance has gone back to basics. All the way back to the farm. 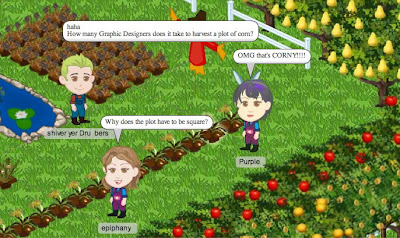 People are growing food gardens in their own back yards. From the White House down to the hoods and everywhere in between, harvesting is IN. While I don't get delicious collard greens from the computer like I do from my friend Shonna's real-life garden, I recognize a value of virtual farming in the numbers. Facebook alone has over SIXTY Farm-related games and quizzes plus tag-along apps. FarmVille (the offshoot of YoVille on Facebook) is leading the hoe-down with 33 million monthly active users – over FarmTown (also on Facebook) which reaps-in 18 million monthly active users.
This growing farming trend is about community as much as self-reliance. Social networking has gone to the farm, at least with the over-thirty's and their mothers. All of these farm games involve visiting and working on friends' farms, giving gifts to each other, and some even include chat rooms. While this trend might pass and go out to sea with the concentric circle craze, it's worth taking note of now. Ride the big wave. People are willing to pour their time into food gardening in the dirt and virtual farming on the computer because of the sense of accomplishment, growth, significance, connection and contribution that they get in "economically challenging times like these." 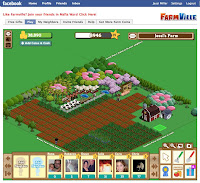 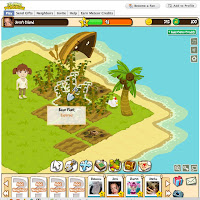 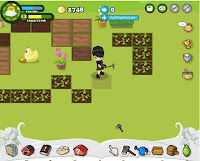