Tiredly checking my email late last night, I came across an invitation to sell my logos on iStockphoto. I couldn't really process it mentally, so I left it open and gave it a second look this morning. I honestly don't think I processed it any better. WTF is this?


Confused, I read everything and then went onto the website to check the forum. I sent an email to a few esteemed designer friends to see if there was something I was missing, some positive angle that I hadn't seen right away. Because to me it looked horrible and I couldn't understand it. 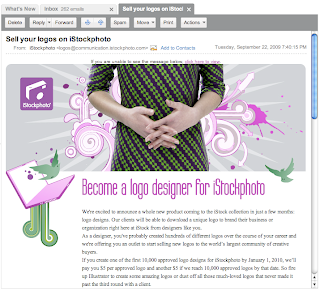 Quick catch up:
In case you're not familiar with iStockphoto, they are an internet-based "member-generated image and design community." Translation: they sell people's photographs, illustrations, videos, audio tracks and Flash files as royalty-free files. They sell to designers. RIght, back to this logo thing they're doing.

A designer submits a logo they have sitting around or a new one they come up with to iStockphoto. If iStockphoto approves it, for a limited time only, the designer receives $5. Woo hoo! iStockphoto now owns it outright. This logo goes up on the site for an asking price of 100 to 750 credits (value of each logo suggested by designer but determined by iStockphoto). If I've done my math right, this puts the logo dollar amount somewhere between $24 and $847.50. Upon sale of said logo it comes down (one-time sale), iStockphoto gives 50% in royalties. The designer walks away with $12 to $423.75 for their original logo design.


Issues that I see straight away:


One, copyright. iStockphoto is putting the burden of checking for trademarkability on the client. Dangerous, plus don't you just want to know that you are spending money on original art?


Two, branding value. Talented, professional designers have enough of a struggle trying to prove their worth without companies like this establishing "bulk pricing" for something as custom as a logo. How can one $50 piece of art tell the story of your company when it wasn't even made for you?


On iStockphoto's forum, designers sound happier than pigs in mud and are rolling their sleeves up to start mass-designing logos for mystery companies. I am so confused! Here are comments from this morning's email that went between a few of my professional designer friends:


"Isn't it time to stop using Istock and other "stock companies" (it's not even really stock, it's really cheap royalty free)? I hope none of you all take part in this. Likewise with crowdsourcing. You can't expect everyone to understand the value of real design in the business environment, but there is no excuse for industry suppliers. Hopefully this logo thing will end up the same place the stock layouts did, nowhere."


"I agree Kip. I have a hotline set up for anyone who is contemplating Spec Work. I will talk you off that ledge. Remember, you are loved, so are your talents and design. Dont throw it all away and make a mess for the rest of us."


So, is iStockphoto helping designers in a rough economy by offering them the opportunity to put work on a site that might or might not yield them at most a few hundred dollars? Or is this yet another pin in the design industry voo-doo doll that someone out there is wickedly poking in? There are no rules for this, we have to police ourselves. If you agree with me that this sounds horrible, please, don't do it and tell your designer friends the same.

Whores don't put their goods up on spec, let's not jump on this new, designer, pimp ride either.